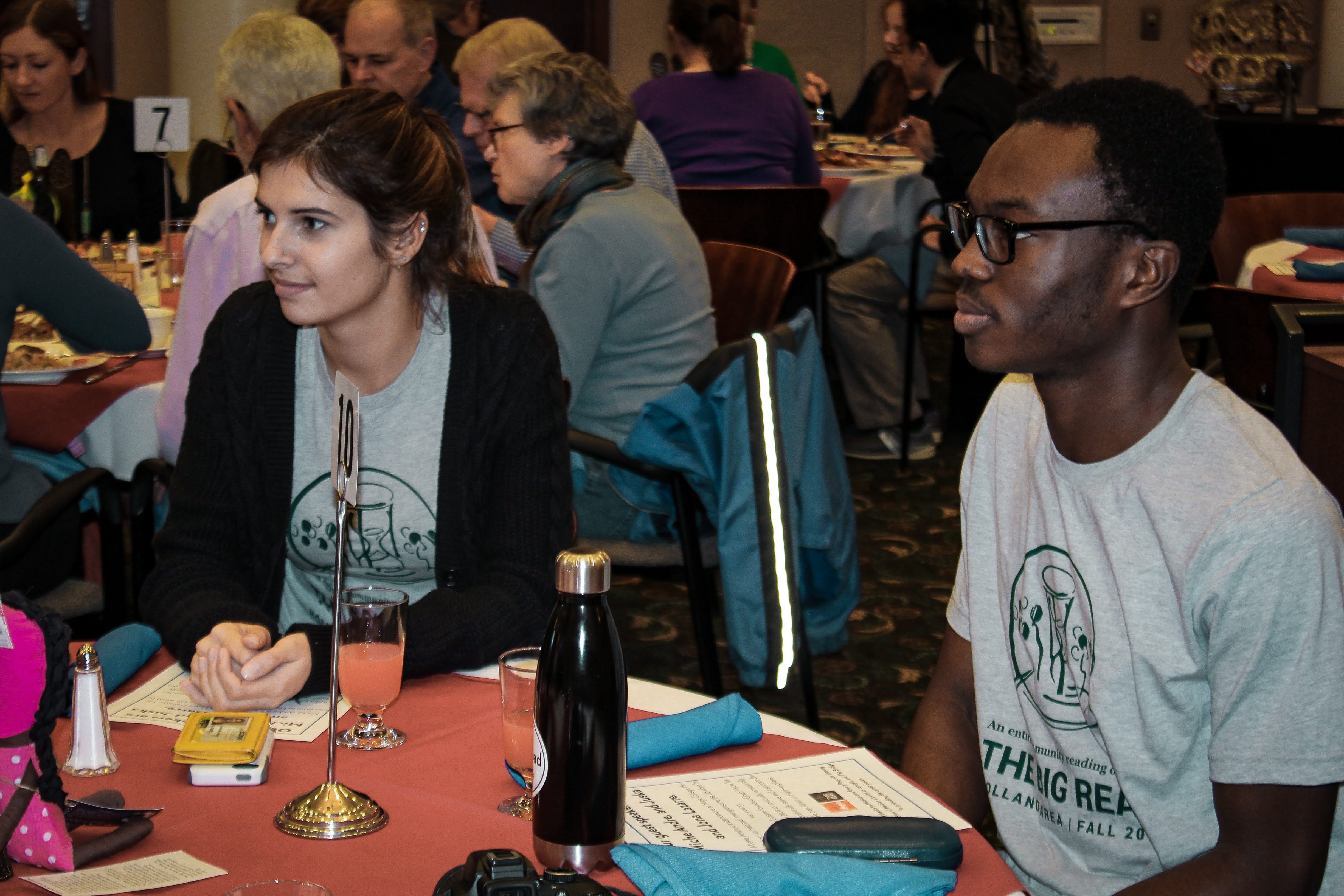 By Deborah Van DuinenMay 19, 2019No Comments

To understand Brother, I’m Dying, we needed to understand the historical context from which it arises. Haiti’s complicated history helps inform Mira and Uncle Joseph’s actions. Across various political leaders, including the troubled legacy of Francois Duvalier “Papa Doc, his son Jean-Claude Duvalier “Baby Doc,” and the violent coupe to overthrow Jean-Bertrand Aristide in 2004, the Danticats navigated the political terrain with caution and pride. But it was the 2004 coupe to overthrow Jean-Bertrand Aristide that ultimately drove Uncle Joseph to the United States and his untimely death.

In the process, he was transferred to the Krome Detention Center in Miami. When he enters Krome, Uncle Joseph becomes Alien 27041999, and Danticat’s prose turns cold and clinical to characterize the mistreatment of a man the reader has grown to love and respect. The generous and compassionate man who devoted his life to his family and congregants has become replaced — almost erased — by immigration officials. Troubling as it is, this cold and removed immigration language is a necessary strand in Danticat’s lyric braid. Understanding the complexities of the United States Immigration System is no small task and yet necessary to fully experience Danticat’s memoir.

In an effort to learn more about immigration in the United States, many students participated in an interactive workshop on the challenges and complexities of “getting in the right immigration line” to become a United States citizen. Led by a facilitator from a local non-profit organization, participants were given identity cards that described different immigrant scenarios. Participants read their identity cards and, based on the information given, considered which of the four visa options (employment, refugee/asylum, diversity, family) might allow them to immigrate permanently and legally to the United States. Our students quickly realized the difficulties inherent in each of these visa options. For employment, a job offer is necessary. For family, the wait time is significantly long, and only specific relationships can petition for one another — grandparents, aunts, uncles, or cousins do not qualify. For the diversity visa, the chance of being selected is 1 in 160, and a high school education and work experience are necessary. For refugee visas, people only qualify if they are fleeing persecution based on race, religion, national origin, political opinion, or membership in a specific social group. Extreme poverty does not qualify someone for refugee or asylum status.

Asking students to engage in the specifics of immigration allowed for a greater potential for empathy and understanding. Student interaction with Brother, I’m Dying deepened as our students began to empathize more closely with undocumented individuals, immigrants, and refugees in their respective communities. In a reflection essay, a student named Linda (a pseudonym) wrote:

“I left the workshop feeling eternally grateful. I think I felt this way because I got to be apart of a group of people, even if it was just for an hour that allowed me to feel a part of something. It was truly incredible because the group that was there was incredibly diverse. There were college students, elders, adults from the communities, families, Caucasians, Latinos, African American, you name it. And they were all there because they wanted to know how to understand immigration. We were all there because we cared. We care and want to have a heart that serves the stranger in a world that makes it hard sometimes to know how to do that.”

Here, Linda expresses appreciation for being “a part of something” — something larger than herself, a required course reading, or a college classroom. She felt solidarity with others in a collective desire to understand the United States Immigration System and experience. Another student, Zoe, responded similarly:

“I really enjoyed the workshop because I was able to see that a whole community was involved and interested in the same thing. I am not used to being involved in something like the Big Read, but being a little part of it makes me feel like I’m a part of something. I’m able to connect, discuss and listen to people from the community. I feel like Brother, I’m Dying is such a good book to be part of the Big Read. It gives people the opportunity to read about immigration and go into depth with a real personal story. This book really lets you feel much of what the immigrant experience is like. You have the father and uncle who are each suffering in their own way, but you see them trying to be strong for their family. That’s what many immigrants try to portray everyday; they try to hold in all their pain because they care more about their family than about themselves. I really enjoyed this book because of that. I personally was able to connect a lot of things to my parents, which is really interesting because it’s such a personal story yet people can still connect to it.”

Like Linda, Zoe enjoyed the fact that people across generational, socioeconomic, educational, racial, and ethnic groups came together around the topic of immigration. In her words, “a whole community was involved and interested in the same thing.” In her reflections about the event, Zoe makes the connection between Danticat’s story and her own. Danticat’s book offers one family’s immigration narrative, but our students’ involvements in the community encouraged them to hear and share other perspectives.

Connecting Danticat’s experiences to others’ experiences was a vital aspect to our pedagogy. Different events in the community-wide reading program provided alternative stories and thus, our course “texts” expanded to include these different narratives. These narratives, told in a variety of mediums including film, panel discussions, and music, allowed for different entry points into the book’s themes and topics.

In the documentary, La Belle Vie: The Good Life, for example,documentary filmmaker Rachelle Salnave travels to Haiti to explore her own family’s immigration story as it relates to class in Haiti. Salnave’s identity struggles with being Haitian-American demonstrate the myriad of ways immigration and citizenship affect people. Just as Danticat navigates the diaspora in Brother, I’m Dying, so too does Salnave in La Belle Vie. The experiences — though different — share that lyric and in-between space. Identifying and discussing the connections and contrasts between these narratives, allowed us to complicate a simplified understanding of immigration.

At a book discussion held at a local hospital and led by a doctor, 70 people gathered to talk about Brother I’m Dying. This provided another kind of narrative for students to compare and contrast. In small groups, participants shared their own experiences with immigration and listened to others — for some, it was great grandparents who immigrated to the United States. For others, including two of my students, it was their own experiences of coming to the United States from Mexico. Nola reflected about her experience in this way:

“Everyone in our group loved hearing what ‘we college kids’ have to say about their questions and the discussions along with the books and about our own lives. Every time one of the doctors leading the discussion had a question for all of us, before anyone had a chance to say anything he would directly look at all of us from Hope and say ‘Wait! Let’s hear what they have to say first!!’ then everyone proceeded to intently nod at us.”

Participating in these events and having their stories affirmed by community members helped our students to see the power of their own narratives. Zira wrote:

“Just like Danticat, I also worry about where immigration will go next. I have many family members that have DACA [Deferred Action for Childhood Arrivals] and that are under temporary protective status. The fact that these resources can be taken away soon is scary. Going to this event allowed me to appreciate Brother, I’m Dying even more. Danticat not only wrote this book for her father and uncle, she also wrote it for immigrants. She said that she hopes that her book can be used to better inform and prepare ICE [Immigration and Customs Enforcement] officers. I hope so too.”

Zira’s comment demonstrates how entering a community conversation and engaging with neighbors in this braided, lyric, and multi-disciplinary way allowed students to approach the book as a record of human experience and collectively look forward and backwards in their own lives.

Uncle Joseph’s tragic story helped students understand that the details and specifics of immigration narratives matter. The memoir gave students a common narrative to share and invited them to witness others. They discovered the importance of engaging with their community and discovered the joys of celebrating differences.