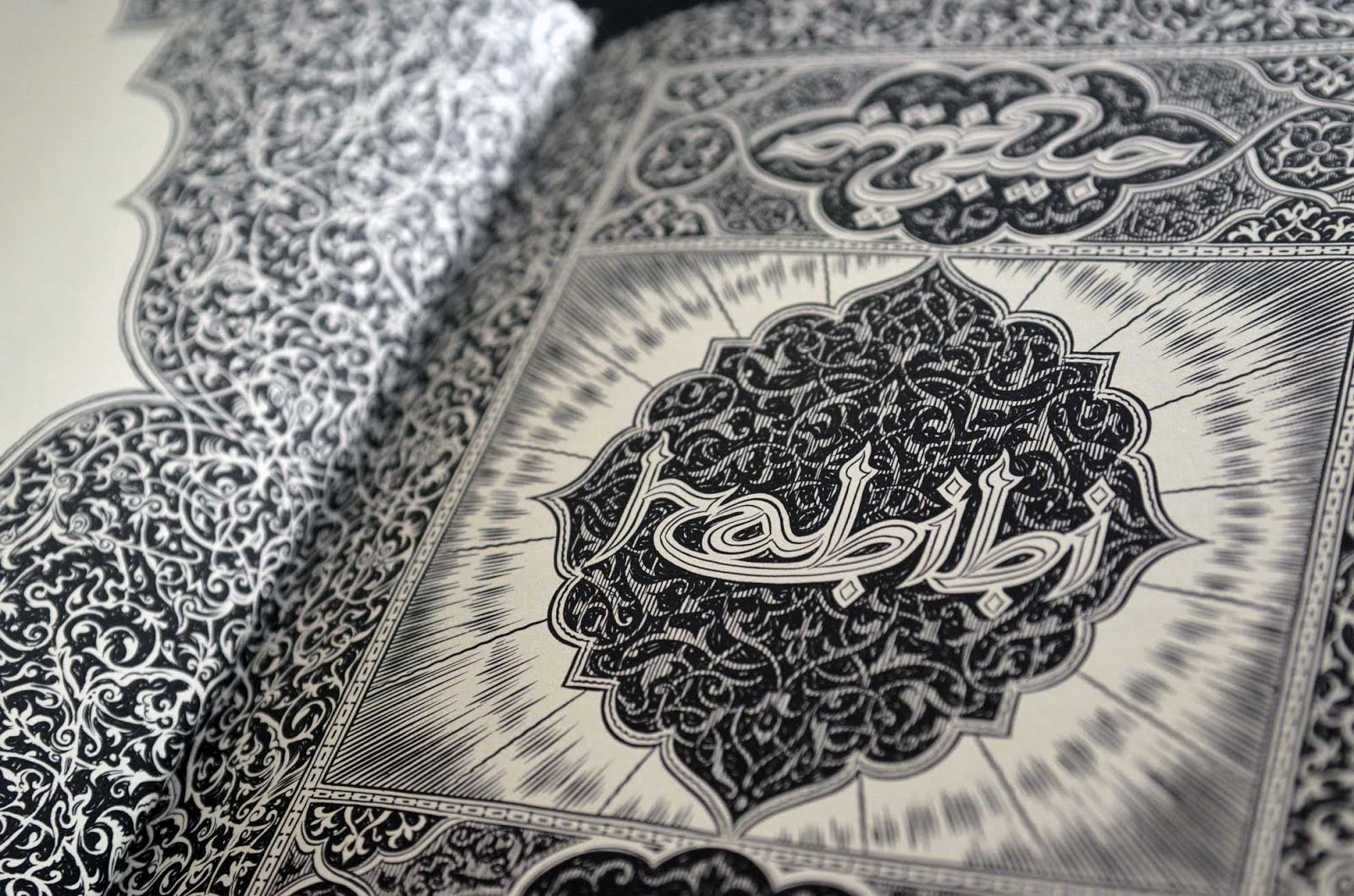 Censorship and the Right to Read: The Story of “Habibi” and its Challenges

Habibi is a harrowing tale. It focuses on Dodola, who is sold into marriage at age nine. Soon her husband is killed, and she is taken by slavers. She escapes, along with Habibi (also called Zam), an African baby whom she adopts as her brother. They make their home in an abandoned boat in the desert. As Zam grows older, he becomes smitten with Dodola and trails her when she leaves the boat. He sees her having sex with traders in return for food. Zam takes water to the local town to sell so that Dodola will not have to prostitute herself. Dodola goes to look for him but is captured and sold into the service of the Sultan as a concubine.

Zam, weak with hunger, is taken in by a group of eunuchs and, to continue eating with them, allows himself to be castrated. When times get hard, the eunuchs sell Zam into slavery, this time to the same sultan to whom Dodola is in bondage. The sultan, displeased with Dodola, commands that she be executed by drowning. Zam dives into the waters with her and, once again, they escape. Dodola gets sick from the polluted water, and Zam nurses her back to health with the help of a lunatic junk trader named Noah. They try to return to their boat in the desert but find that a new landfill has mostly covered it.

Journeying back to the town, they make their home in a half-constructed, high-rise apartment building. Zam gets a job at a bottled water plant. Dodola sets about making their squatters’ apartment into a home. Dodola confesses that she wants to have a baby with Zam. He runs away, ashamed that, as a eunuch, he cannot help Dodola achieve her desire. Zam nearly commits suicide at the edge of a hydroelectric dam, then chooses to live. He returns to Dodola, and both agree to love each other. The building begins construction again, and they must leave. They use Zam’s earnings to buy a boat and rescue a baby from slavery, then leave to raise the child in love.

This complicated epic, containing stories within the stories, has the potential to provide opportunities for class discussions covering a wide variety of topics related to economics (including pollution in a throwaway economy), the scarcity of resources, systemic poverty, inequity in health care, and income inequity. Topics connected to culture and morality include how violence affects children, what constitutes rape, the societal treatment of women, definitions of love, sex in connection with both hatred and love, the difference between suffering and sacrifice, and the similarities and differences between Islam and Christianity.

Habibi has been praised for its beautiful visual design and its impressive and delicate ornamentation in the tradition of Islamic culture. However, it has also received much criticism. It was named one of the most challenged books in 2015 for its “nudity, being sexually explicit, and unsuited for age group” (American Library Association, 2017). Other criticisms include its depiction of Arabs and Arab culture.

Several factors contribute to its challenges. The graphic novel contains explicit depictions of sexual violence and nudity. The sex and nudity described in Habibi do not convey the social bonding dimensions of sex that enhance human flourishing. Rather, sex is portrayed as abusive. It is a tool for men to satisfy physical wants and desires, a way for men to manifest their power over others. Women have forced sex in order to survive. In addition, women in Habibi are wholly objectified by other characters. Dodola lives without autonomy. She is sold by her poverty-driven parents. She is raped constantly: as a child by her first husband; as a child and teen by the men in the caravans from whom she tries to steal food; by the sultan in whose harem she lives. In addition, women living with her in the harem are thrown away because the sultan becomes bored with them. Women are regarded as sexual objects rather than equal human beings in a radical patriarchal society.

Finally, to some readers, cultural xenophobia is presented in the story lines. The dramatic and heartwrenching story is set in a Muslim world but created by a white, American writer. Slavery, child marriages, and rape portrayed in the novel may not be new to the majorities of extant cultures in the world. Nevertheless, the fact that a white writer authored this book may draw people to the conclusion that Islamic cultures should be despised. Less dramatic but still of concern are portrayals of another culture as “exotic” by a white author. Readers can see ethnocentricity in writing negative portrayals of cultures outside of one’s heritage.

Challenging Religion or Spirituality in YA Literature

Censorship challenges around this book have tended to focus on the nudity and sexually explicit scenes in the book, but Thompson’s treatment of Islam has also been challenged. That troubles us. Portrayals of world religions should not be censored without a great deal of thought.

Mention of religion or spirituality in mainstream YA literature remains rare (Campbell, 2015). That Thompson is willing to explore Islam sets this book apart from many novels that avoid religion and/ or spirituality. Avoidance of religion or spirituality suggests that religion and spirituality are not present or even important in characters’ (or readers’) lives. Findings based on the National Study of Youth and Religion suggest that the majority of American youth are religious, in so far as they affiliate with some religious group or tradition, and that about half of American adolescents regularly participate in religious organizations, such as religious service attendance and participation in religious youth groups (Smith, Denton, Faris, & Regnerus, 2002).

Challenges to YA literature must be thoughtfully undertaken. “Offensive” words and images should be interpreted in the context of entire story lines and with consideration of the potential knowledge that can be obtained for a reader. The burden of proof for censorship must be on the critical reader. As Martha Nussbaum (2004) observes, “All modern democracies are prone to hasty and sloppy thinking and to the substitution of invective for argument” (p. 44). Censoring young adult literature because of religious storylines or presentations of social groups, even those groups some despise, is anti-intellectual. Books do the work of spreading knowledge, including offering knowledge of religions and cultures that shape human actions and policies. The censoring of books, which inherently denies a culture or society access to ideas, must be subject to multiple tests and rigorous analysis to justify exclusion. Some of these tests include providing evidence that the content of the book is considered prurient, obscene by community standards, lacking in social value, or capable of inciting violence, according to the three-pronged Miller test determined in the case of Miller v. California (1973). Although Habibi is a jarring read and one of the top ten challenged books in 2015, it does not meet levels of obscenity for challenging YA literature.

Examining How Knowledge Is Created

A lucid argument for censorship requires investigation of how knowledge is constructed through language. Foucault’s theory of rhetoric as epistemic provides a useful process for analysis of inclusion or exclusion of texts for prurience, obscenity, lack of social value, or capability of inciting violence (Foss & Gill, 1987). Foucault’s framework of knowledge construction is also helpful for literacy brokers when they select or deny texts based on treatment of religious or spiritual matters that are set in a location (in the case of Habibi, the Arab world) that many people in our time and place have been taught to despise, thereby denying the humanness of inhabitants of that world.

Foucault believed that the central role of discourse and literacy is to structure knowledge. What a society believes to be acceptable or not acceptable is labeled through discursive practices that follow rules that a culture understands to be true and right; because they are marinated in such practices, the rules become common sense. These rules are written, spoken, or practiced in social relationships. Discursive practices dictate the kinds of literature that are acceptable in school curricula (Foss & Gill, 1987). Acceptable discourse requires understanding the sociocultural context of a literacy act and the value of the individual or community engaging in reading, writing, or symbolic communication (Street, 1984).

Rules for discourse determine, often implicitly, what can be talked about, who should be granted the power to be literate, and who or what should be denied literacy. Rules become established for what can be presented to children or adolescents, such as the kinds of clothing (or lack of clothing) acceptable in texts; what gestures, behaviors, and life circumstances are appropriate in the lives of characters; and the literary forms that are most desirable. For example, the Common Core State Standards privilege nonfiction in content areas other than English Language Arts, causing some teachers and administrators to argue that nonfiction is more desirable in schools than fiction (Shanahan, 2012). Those who get to speak about books or have voices in books take on roles based upon a culture’s discourses and literacies that are either allowed or eschewed. What results is that relationships around books take on forms, structures, and practices, and some people will not be considered worthy of inclusion. Those who are included and admired take on power granted by an “overall system, process, or network of force relations spread through the entire discursive formation” (Foss & Gill, p. 389). Discourse, rules, roles, and power coalesce to form knowledge—that which is considered to be true and worthy of literature study.