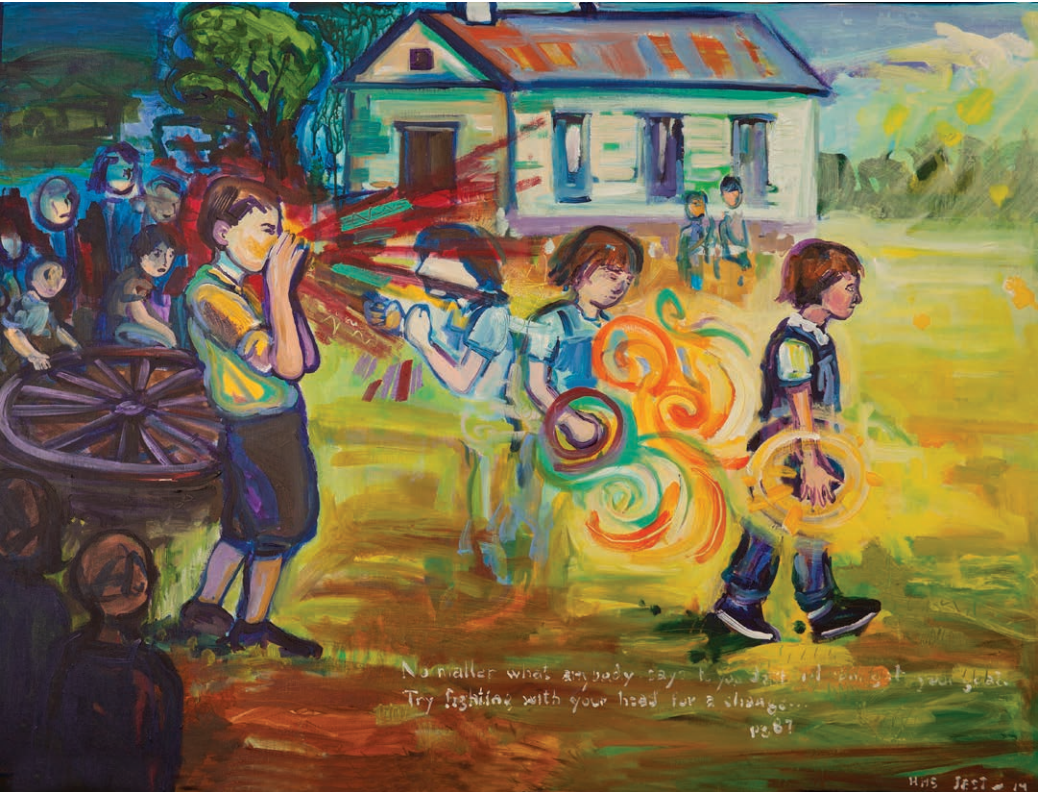 By Deborah Van DuinenMay 10, 2019No Comments

An initial question for any teacher considering arts integration is about purpose. For what end do students create art in response to literature? To deepen their understanding of what happens in a text? To express feelings and reactions to the book’s topics/issues? Responding to literature in general and specifically with visual arts often goes in either of these directions but we are learning that these differing purposes can be woven together beautifully.

Rosenblatt’s (1982) transactional theory of readers and texts has given us a framework for thinking about the various ways that readers interact and make sense of texts. For Rosenblatt, reading is a “two-way process, involving a reader and a text at a particular time under particular circumstances” (p. 269). Within this process, Rosenblatt argues texts can be read with efferent and aesthetic stances. Our purposes for reading texts determine which perspective we assume. An efferent stance looks for facts and information. It is reading to “take away” pieces of information and entails “a process of more stringent narrowing of the focus of attention” (Rosenblatt, 1981, p. 23). An aesthetic stance, in contrast, enables readers to process “the associations, feelings, attitudes, and ideas that these words and their references arouse within” (Rosenblatt, 1994, p. 25). It is reading for the purpose of exploring the work and oneself and requires “an opening of the shutter, so to speak, to admit a broader field of awareness” (Rosenblatt, 1981, p. 23). Readers adopting an aesthetic stance foreground their experience of reading the text and reflecting on it.

While Rosenblatt is clear to state that both efferent and aesthetic stances are present when we read and that readers can move back and forth between the two, it can be easy to approach these stances, for the purposes of an English language arts assignment, in opposition to each other. Our first iteration of our visual arts projects did exactly this as we foregrounded an efferent stance of reading during our first year. Participating teachers and students chose a scene from To Kill a Mockingbird (Lee, 1982) with the purpose of gaining a deeper understanding of what the author intended for the specific scene and how it fit with the book’s larger themes. Teachers and students met with the artist and brainstormed what information they would need in order to portray the scene according to its cultural and historical time period.

One of the scenes Beth Sherwood’s students chose was when Scout Finch walks away from a fight with Cecil Jacobs at the request of her father Atticus (Figure 2). Students conducted online research to learn more about typical Southern 1930s school buildings and surroundings as well as children’s clothing and playground games. Students also did a close reading of the scene in order to figure out the characters’ probable and possible postures and reactions. Close reading, a key requirement of the Common Core State Standards, is an intensive analysis of a text in an effort to determine the text’s meanings, craft, and form. It is often done through textual annotations of noting patterns and asking questions about identified patterns. In doing close readings of the scene and other related parts of the book, students identified how the scene fit into the book’s larger themes. After completing this research, students discussed their findings with each other and the artist and collectively brainstormed what, where, and how to visually represent the scene.

In 2017, our visual arts project reflected both efferent and aesthetic stances to literature. Students created art to better understand the characterization of the daughter in Julie Otsuka’s (2002) When the Emperor was Divine as well as their own individual responses to the book’s themes of home, identity, and belonging. In collaboration with the artist, students discussed what textual details they needed to pay attention to as well as what outside research they needed to do in order to create art in response to the book. However, rather than trying to visualize the character only as the author might have originally intended, students came up with images that represented their own attitudes and feelings as they read through the book, such as apple blossoms, black licorice, a crown, and peanut butter and jelly—images used throughout the book but also images that represented students’ own attitudes and feelings (Figure 3).

An unexpected outcome of our work has been the overlaps we have seen between Rosenblatt’s reading stances and the kinds of responses embedded in writing a visual or formal art analysis. A visual analysis consists of what the viewer sees in a piece of art in terms of form, subject matter, and material (Barnet, 2015). This is similar to Rosenblatt’s efferent stance as the viewer examines the art for formalist particulars. However, a visual art analysis also includes mention of the meaning a viewer attributes to the art through personal connections. Rosenblatt’s aesthetic stance correlates with this.